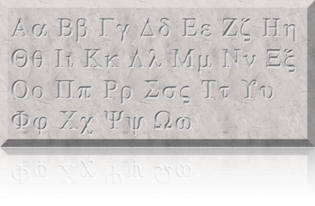 The letters in the Greek alphabet presented below are used for printed Ancient Greek texts. The earliest Greek texts that have survived were written with a radically different script called Linear B.

For a detailed and wonderfully well argued discussion of the origins of the Greek alphabet, see Roger D. Woodard’s book, Greek Writing from Knossos to Homer.

The traditional Erasmian pronunciation used in many schools to teach Biblical Greek and sometimes Classical Greek is not given on this site. It is omitted because it does not accurately reflect the actual pronunciation of the language at any point in its history. While it can be valuable for learning to spell some ancient Greek words, it has no real value in learning how Ancient Greek was actually pronounced.

In the examples, consonants are pronounced accompanied by the vowel /ɑ/ for context.

The following 10 minute by Tim McNinch will teach you the Greek alphabet using Hellenistic Greek pronunciation. It does not cover the diphthongs presented above, but does a great job of teaching all of the individual letters.

A diphthong is a combination of two vowel sounds, gliding from one to the other, as the oy in boy. A digraph is a single sound represented by two letters like the th in think.

Choose any diphthong or digraph from the list below to learn how it is pronounced in Modern Greek and how it was pronounced in the Classical and Hellenistic periods.

Practice the Diphthongs from the Hellenistic Period

With just a little practice you can master the diphthongs as they were pronounced in the Hellenistic Period. This video by Tim McNinch can help.

Carl Conrad has provided a fine discussion of the history of Ancient Greek pronunciation by, tracing its development from Indo-european. (Clicking the link will download a PDF file.)

Books on the Greek Alphabet

Roger D. Woodard's book, Greek Writing from Knossos to Homer: A Linguistic Interpretation of the Origin of the Greek Alphabet and the Continuity of Ancient Greek Literacy

, is a wonderful combination of Classical Studies and excellent understanding of Linguistics. He argues for an unbroken history leading from the Linear B syllabary to the Greek Alphabet. The argument is well documented and lucid.

In Homer and the Origin of the Greek Alphabet

, Barry Powell has written a provocative book asserting that the Greek alphabet was designed intentionally for recording the works of Homer. While Powell shows a thorough knowledge of the available evidence, his proposal still rests on assumptions that cannot be fully tested.

Other Websites that Display the Greek Alphabet

There are many other sites on the internet that show the Greek alphabet. Here are some that provide particularly useful information: