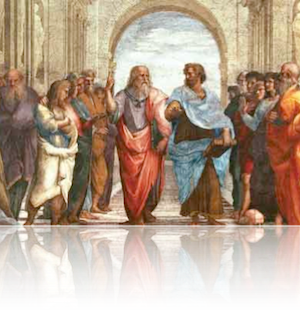 Our Sister Site at HellenisticGreek.com

You can study Hellenistic Greek, the form of the Greek language found in the Christian New Testament, the writings of Stoic philosophers such as Epictetus, and a wealth of other documents from the period of the Greek and Roman empires, at our sister site, HellenisticGreek.com.

The beginnings of an approach incorporating elements of a communicative model to learning Hellenistic Greek can be found at HellenisticGreek.com or at LivingText.org. These materials cannot replace a face to face class, but can be used free of charge either as a part of such a class or on their own. The materials are far from complete, but can give you a taste of learning Greek in Greek.

The most widely known approach to learning Biblical Greek in Greek is the course provided at the Biblical Language Center in Israel, and the most widely recognized voice in the field of communicative approaches to Biblical Greek is Randall Buth. Dr. Buth began developing this approach in the mid 1990s, though the thought that went into that effort undoubtedly starter earlier.

This course requires a trip to Israel.

Through ConversationalKoine.com Michael Halcomb is making a communicative approach to Hellenistic Greek available via distance learning. This course is web based, but it is not free. You can purchase Halcomb's Speak Koine Greek: A Conversational Phrasebook, by clicking on the image to the left.

Paul Nitz teaches koine Greek in Malawi using communicative methods. Many of his lessons are available free of charge on Youtube. His approach is different from the two above in that he uses the traditional Erasmian pronunciation rather than Reconstructed Koine.

The number of websites offering a traditional approach to teaching Koine Greek is too great to list. Many require you to buy a textbook or pay a fee to use the online materials. I list one site here because it is completely free.

Corey Keating has had a set of lessons for learning New Testament Greek online for quite some time now. His materials appear to have last been updated in 2010.

Christophe Rico teaches at Polis Institute in Israel (Polis: the Jerusalem Institute of Languages and Humanities). He uses a communicative method, but does not use Reconstructed Attic or Reconstructed Koine pronunciation. He used the traditional Erasmean system instead.

The Polis Institute does much more than teach Ancient Greek. In all language classes, regardless of the language, the Institute uses what it calls the "Polis Method." You can read about this method at the institute's website.

With the assistance of the Berkeley Language Center of the University of California, Berkeley, Donald J. Mastronarde has made available a wonderful set of online Ancient Greek Tutorials based on his book, Introduction to Attic Greek

. While these tutorials are based on Mastronarde's book, most of them are very usable without it!

For more advanced students, Jeffrey A. Rydberg-Cox provides an overview of Greek syntax based on Herbert Wier Smyth's A Greek Grammar for Colleges.

Jonathan Slocum of the University of Texas at Austin has edited and updated a series of lessons for Classical Greek originally produced with Winfred P. Lehmann.

Textkit provides downloadable copies of a wonderful variety of Classical Greek textbooks on their Greek and Latin Learning Tools page.

Elaine Woodward and Marianne Pagos, teachers at Boston Latin School, have provided a concise handbook (the Greek Enchiridion) to assist you as you learn to read Classical Greek.

Check out the Readers Page to find downloadable Greek texts designed to help you improve your reading ability.