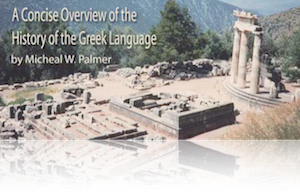 This page offers only a very brief introduction to the history of the Greek Language, giving only the basics. For a thorough treatment of the topic, read Geoffrey Horrocks' book, Greek: A History of the Language and its Speakers.

The history of the Greek Language begins, as far as the surviving texts are concerned, with the Mycenaean civilization at least as early as the thirteenth century BCE. The earliest texts are written in a script called Linear B. After the collapse of the Mycenaean civilization (around 1200 BCE) writing disappeared from Greece. In the late ninth to early eighth century BCE a script based on the Phoenician syllabary was introduced, with unneeded consonant symbols being reused to represent the Greek vowels. The oldest surviving alphabetic inscriptions are written using this new system and date from the late eighth century BCE.

In the classical, or hellenic period, Greek existed in several major dialects, each of which has its own significance for the history of the language, but the most influential of these would ultimately prove to be the one spoken in Athens, called Attic. Well within the hellenic period, though, Attic and Ionic—the form of the language spoken mainly in the Greek city states directly across the Aegean Sea from Athens—exerted significant influence on each other as the preferred forms of the language for oratory and philosophical prose, eventually producing a dialect now called Attic-Ionic.

After the conquests of Alexander the Great (roughly 336-323 BCE) the language underwent far-reaching changes. Alexander carried the Attic-Ionic form of the language, along with Greek culture more generally, far into the Near East where it became the standard language of commerce and government, existing along side many local languages. Greek was adopted as a second language by the native people of these regions and was ultimately transformed into what has come to be called the Hellenistic Koiné or common Greek. This new form of the language remained essentially a further development of the Attic-Ionic synthesis.

The Hellenistic Koine brought significant changes in vocabulary, pronunciation, and grammar, and some of these changes have persisted into Modern Greek. The time of rapid change initiated by Alexander, though, lasted from about 300 BCE to 300 CE. The histories of Polybius, the discourses of Epictetus, and the Christian New Testament all date from this period and are good representatives of the Koine.

During the hellenistic period some purists reacted strongly against the Koine. They developed a movement called Atticism, which treated classical Attic as the only acceptable standard for prose writing. This movement would continue to influence Greek writing well into the modern era by constraining the production of literature in the normal idiom of actual daily speech.

Atticism dominated the production of literature for the entire Byzantine era from the establishment of Constantinople in 330 until 1453 when the city was defeated by the Turks. The development of actual daily speech during this period is extraordinarily difficult to reconstruct since the vernacular speech was deemed unfit for literary production. As Greece entered a protracted period of bondage to the Turks lasting four hundred years, its literary production had been drastically reduced by the demands of Atticism.

Crete managed to resist Turkish control until 1669. The poetry produced there in the local dialect near the end of this period would contribute significantly to the development of modern demotic literature as would the folk songs produced on the mainland.

When Greece finally won its freedom in 1830 a new kingdom was formed with Athens and the Peloponnese at its core. The dialects spoken in these regions became the basis for the standard spoken language of today's Greek society. This standard was not formed directly from the folk songs and poetry of earlier peasant society, however. A purified, katharevusa (Καθαρεύουσα) form of Greek was devised. Efforts to impose it were heavily influenced by the old Atticism, though, and the attempt to produce a prose medium broad enough to cover both formal and colloquial situations has proved extraordinarily difficult. Even today the language question still presents problems, yet the continuing growth of educational institutions as well as journalism and the broadcast media have begun to affect a solution. The distance between demotic and katharevusa is narrowing as a way of speech arises which combines aspects of both.

Three terms are used to designate long periods in the history of the Greek Language: Hellenic, Hellenistic, and Byzantine.

This website, available at both Greek-Language.com and GreekLinguistics.com, focuses on the Hellenic and Hellenistic-Roman periods.

For further reading on the history of the Greek language, see Brian Joseph's article on Ancient Greek from the Encyclopedia of the World's Major Languages (H. W. Wilson Publishers, 1999) posted at Ohio State University's web site.

For more detail on the earliest form of Greek writing, see our Linear B page.