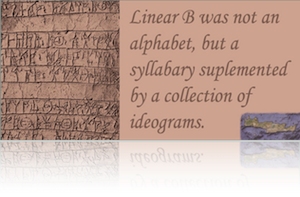 Linear B is the Earliest Form of Greek yet Discovered

The script called Linear B is a syllabary, not an alphabet. That is, each symbol represents a unique syllable, not an individual sound. Linear B is more than a syllabary, though. The script includes over 100 characters, and while most represent syllables, some are logograms or ideograms (representing entire words or concepts).

The language represented by this script is called Mycenaean and is thought to be an early form of Greek. The script was first discovered at Knossos in central Crete, but was also later discovered in Mycenaean regions on the mainland.

The term "Mycenaean" is derived from the name of the city called Mycenae and the culture it propagated. This culture flourished in the fourteenth and fifteenth centuries BCE, the period of the events described in the Iliad and the Odyssey. While these Epic poems were written much later, and with a different writing system, they describe events that are set in the earlier Mycenaean period. 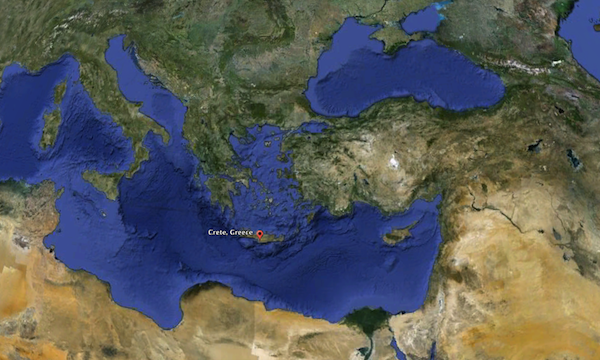 Some, but not all of the tablets found at Mycenae since the city was excavated in the 1870s are written with the Linear B script. The script may have been borrowed from the Minoan civilization of Crete whose language was written using a similar syllabary which we now call Linear A. The Minoan language represented by Linear A has not been deciphered, so we do not know what these inscriptions mean, but Linear A and Linear B look similar enough to suggest borrowing of individual characters.

Tablets written using the Linear B script begin to appear only after the decline of the Minoan culture following the eruption of Thera (a volcanic island). It is likely that Greek speakers who settled Crete after the disaster adapted the Minoan script (Linear A) to meet the needs of writing their own language. This adaptation may also have been done by Minoan scribes who survived the catastrophe, as they sought to adapt to the new Greek-dominated society which came quickly to replace their own.

Other Resources Related to Linear B (Fonts and further information)

A nice font to represent Linear B is available here.

For a somewhat more detailed discussion of Linear B, including pictures of the characters and suggested pronunciation, see the Linear B page at the Omniglot site.

The Linear B page at AncientScripts.com provides a lucid discussion of the symbols and their functions.