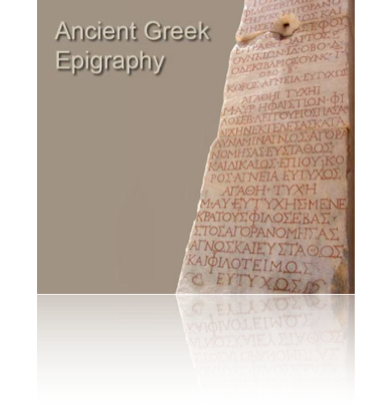 For a thorough discussion of the epigraphic evidence dating from the Hellenistic-Roman period, see Bradley H. McLean, An Introduction to Greek Epigraphy of the Hellenistic and Roman Periods from Alexander the Great down to the Reign of Constantine 323 B.C. - A.D. 337. For a discussion of the wider question of the nature of epigraphy and its role in the judgments of historians, see A. Geoffrey Woodhead, The Study of Greek Inscriptions.

Numerous organizations maintain websites providing information on their own epigraphical work or offering brief descriptions of work with inscriptions done by others. Some provide images of significant inscriptions.

The list below provides direct access to a number of image collections. These collections are developed and maintained by some of the organizations listed above. By placing their images on the internet they have made them available to a worldwide network of scholars interested in ancient Greek epigraphy. They deserve our sincerest gratitude.

While many books on epigraphy are available, the following are influential and provide specific discussion of ancient Greek inscriptions. Any of them would make a good starting place for your study.

Bradley McLean, An Introduction to Greek Epigraphy of the Hellenistic and Roman Periods from Alexander the Great down to the Reign of Constantine 323 B.C. - A.D. 337. University of Michigan Press, 2011.

John P. Bodel provides a solid introduction to what inscriptions can reveal about ancient life in the Greco-Roman world. Epigraphic Evidence offers a useful, readable account of the vast diversity of inscriptional remains from this period as well as the difficulties faced by historians who must rely on such evidence.

This is considered by many to be the standard introduction to the field for readers in English. Besides a solid coverage of the major aspects of the discipline, this second edition provides a guide to the major corpora of published Greek inscriptions.

Professor Woodhead passed away on November 6, 2008. He will be missed, and his contribution to the field long remembered.

This collection of essays is divided into two sections: one covering Athens, and the other covering the wider hellenistic world. The collection illustrates well the way analysis of individual inscriptions informs the work of historians.