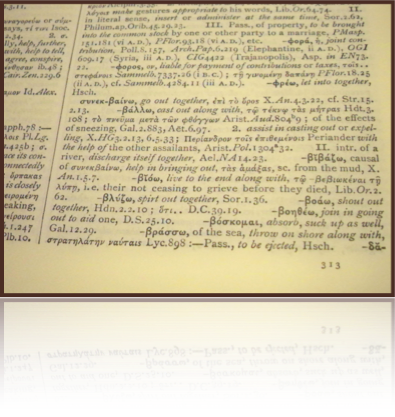 Most of the following lexica are electronic editions that can be used interactively online. Others are PDF files that can be downloaded and used on your personal computer. All of these digital versions are available free of charge.

Most of the works cited here are Greek-English diccionaries, but a growing number of online resources are Greek-Spanish. I have added two of these in this 2020 revision of the page.

Near the bottom of the page you will find dictionaries in print available for sale.

See more on this project below under Studies in Greek Linguistics. The work is in progress, but seven volumes are already available. You can search the lexion online at http://dge.cchs.csic.es/xdge/. Copy the link and paste it into your browser's search bar.

Presented as a language acquisition aid, this Greek-Spanish online dictionary is under development, but is already functional. It presents Greek words with brief translation assistance and explanations of meaning with examples from Ancient Greek literature.

Katabiblon.com is a work in progress that provides a wiki lexicon for New Testament Greek. The quality of the entries varies significantly. Each entry has a gloss or glosses for the Greek word and space for addition of an extended definition. Perhaps with time those definitions will be written.

Logeion is a wonderful online dictionary interface that was developed following the example of the Dictionnaire vivant de la langue française, to provide simultaneous lookup of entries in the many reference works that make up the Perseus Classical collection (see below).

The Perseus Digital Library provides a searchable copy of the Liddell-Scott-Jones lexicon, a Greek Word Study tool, and access to a phenominal number of Greek texts—and all at no cost!

Unfortunately, Perseus does not support entering search terms in Politonic Greek. You must enter your search term in Persus' transcription using English characters, but there is a key on the search page to help.

While this electronic edition of LSJ is tremendously useful, it is not as up-to-date as the ninth printed edition. For serious lexical study it is still necessary to consult the paper-and-ink version.

You can search several different dictionaries, including LSJ, using Perseus under Philologic on the University of Chicago's site.

You can search the LSJ Lexicon at the Thesaurus Linguae Graecae site as well. To perform an English to Greek searche, selecting "Meanings" as the place to search.

You must register and log in to the Thesaurus Linguae Graecae site to use the lexicon.

Woodhouse at University of Chicago

Woodhouse's  English-Greek Dictionary can be searched at the library of the University of Chicago. While the dictionary is quite old (1910), it can be very useful for learning Attic prose composition.

Textkit provides a PDF version of  Souter's 1917 lexicon . This lexicon should not be used for serious exegetical work, but can be a useful tool for casual reading of Greek texts. Appropriately, the last entry in this lexicon (on page 297) is ὠφέλιμος ("useful").

Wiktionary.com is an ambitions project to provide a free dictionary covering numerous languages. Many of the entries for Ancient Greek already provide a wealth of information about the known forms of Greek words, but only scant information on meaning, limiting what the site offers to simple glosses rather than actual definitions.

Frederick William Danker, ed. A Greek-English Lexicon of the New Testament and Other Early Christian Literature

This is the standard lexicon for classes in Biblical Greek. It is an essential tool for serious study of the Greek text of the New Testament. Originally written by Walter Bauer as Wörterbuch zu den Schriften des Neuen Testaments, this third revised edition by Frederick Danker has expanded citations from the primary literature and corrected entries on the basis of evidence that has come to light since the original publication.

Greek-English Lexicon of the New Testament: Based on Semantic Domains

J.P. Louw and E.A. Nida. Greek-English Lexicon of the New Testament: Based on Semantic Domains

This two volume set is not designed to compete with more traditional dictionaries like the one by Danker discussed above, but to provide two things they do not: definitions and connections to other Greek words with similar meanings.

Most Greek-English lexica provide lists of glosses—one word translation options—rather than actual definitions, but Louw and Nida have provided discussions of the meanings of each Greek word. They provide connections to other Greek words with similar meanings through the organization of the lexicon.

Rather than listing entries alphabetically, volume one groups words together that have similar or overlapping meanings. These groupings are called semantic domains. Volume two is an alphabetically organized index of all the Greek words treated in volume one plus an index of English words used in the definitions, enabling the work to be used to a limited extent as an English-Greek lexicon as well as Greek-English.

A Reader's Greek-English Lexicon of the New Testament

Sakae Kubo. A Reader's Greek-English Lexicon of the New Testament

Designed for readers of the Greek New Testament, this lexicon does not provide definitions, but does facilitate reading the Greek text. For each passage, the lexicon lists those words that appear less than five times in the New Testament and gives a translation suggestion (gloss) for each one.

The first two of the following online dictionaries are available free of charge.

Utrecht Institute of Linguistics has produced a well designed lexicon of linguistics that is searchable online. Since the entries have been submitted by various users of the lexicon, there is a natural variation in the quality of the articles.

The Summer Institute of Linguistics' glossary of linguistics terms is somewhat more limited in scope than the Utrecht Institute Lexicon, but is still very useful. It contains only linguistics terms that could serve as glosses in a text, and excludes broader terms that designate, for example, theories or other entities that could not serve as glosses for words or phrases in a text.

The Oxford Reference online search service covers a wide variety of reference works in 25 different subject areas allowing users to search them all simultaneously. Since a good number of the reference works covered are from the field of linguistics, this search service functions well as a digital dictionary of linguistics. Unfortunately, a paid subscription is required for full access. Still, much of the material is available without charge.

P. H. Matthews' wonderful Concise Oxford Dictionary of Linguistics (3rd ed.) is one of these reference works. It covers a variety of subfields making it a highly useful tool for students finding their way through the maze of linguistic theories and related fields of study.

Dictionaries of Linguistics in Print

Several very sound dictionaries of linguistics are available to support your study. Here are some of the best.

David Crystal, author of Language and the Internet,

, The Cambridge Encyclopedia of Language

and numerous other books on language and linguistics, has written and repeatedly revised this phenomenal dictionary of linguistics. It covers many different types of linguistic inquiry and models of analysis, providing an excellent resource for any student of linguistics.

The practice of writing dictionaries is called Lexicography. The following studies in Greek Lexicography are available online.

Article on Greek Lexicography and the TLG

http://dge.cchs.csic.es/bib/irvine.htm
Copy the link and paste it into your browser's location bar.

The team producing the Diccionario Griego-Español has relied heavily on the Thesaurus Lingua Graeca database of Ancient Greek texts. This paper, originally published in Emerita, explains this dependance and the value of the TLG for lexicographical study.

The Faculty of Classics, University of Cambridge (UK) hosts a project whose goal is to produce a new Ancient Greek-English Lexicon, "re-examining the source material used in other dictionaries and examining the new material which has been discovered since the end of the nineteenth century."

A tremendously ambitious project to create a new lexicon of Ancient Greek, the Diccionario Griego-Español (http://dge.cchs.csic.es/xdge/), is housed at the Instituto de Lenguas y Culturas del Mediterraneo y Orient Proximo (Institute of Language and Cultures of the Mediterranean and Near East) and directed by Francisco R. Adrados and Juan Rodríguez Somolinos. The project has already produced seven volumes (covering α to ἔξαυος) that are currently available online.

The English translation of the overview of the project is, unfortunately, unreliable, and the project is hosted on an insecure server. Since there is nothing for sale at the site, though, this is not a risk for users. Just copy the URL (http://dge.cchs.csic.es/xdge/) and past it into your browser's search bar.

Since the project is managed by a non-profit organization, the phenomenal work is available online free of charge.

Writers in the ancient world who produced dictionaries or word lists

Amerias was a Macedonian lexicographer. He is known for a work entitled Γλῶσσαι that included Homeric vocabulary as well as vocabulary from later Greek. Little of the work seems to have been specifically Macedonian.

Inventor of one of the first systems of punctuation, quite unlike modern punctuation, and used only in poetry, Aristophanes of Byzantium also compiled collections of archaic and unusual words with explanations. His 'punctuation' system used medial (·) lower (.) and higher (·) dots as indicators of pauses and breathing when reading poetry aloud. The segments of text after which these dots were used gave us our modern English words comma, colon, and period. Aristophanes dots did not indicate anything about the linguistic structure of the texts in which they appeared. They only indicated pauses and breathing for oral recitation.

A prolific writer of commentaries on literary works, Didymos chalkenteros also wrote a treatise on words of ambiguous or uncertain meaning (at least seven volumes) and one on corrupt or 'false' expressions. Both are now lost.

Hesychius of Alexandria was a Greek grammarian who flourished near the end of the 5th century CE. He compiled the most thorough lexicon of unusual and obscure Greek words that has survived. It exists now in a single 15th century manuscript.

Philitas wrote a vocabulary entitled Ἄτακτοι γλῶσσαι (Disorderly words) explaining the meanings of rare literary words, words from local dialects, and technical terms. This work, now lost, may have taken the form of a lexicon.

Philo of Byblos wrote, among his many works, a dictionary of Greek synonyms.

Stephanus of Byzantium wrote a geographic dictionary entitled Ἐθνικά. Only small fragments remain, though an epitome compiled by Hermelaus has survived.